Voter Beware–Mainstream Coalition is Coming for your Wallet

At least two local campaigns in the primary (Tuesday, August 01, 2017) are funded by a PAC called the 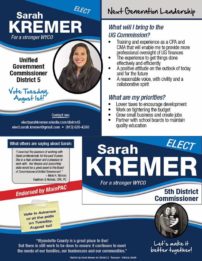 Mainstream Coalition (MC). No big surprise in Wyandotte County, where voters have elected only one Republican since 1932.  Ironically, it was Richard Nixon. Not really irony, I guess, it is, after all, Wyandotte County. That said, the Mainstream Coalition is the very same group that recently covertly funded several “moderate Republicans” into office at the state level who then immediately passed the biggest income tax increase in Kansas history.

The upcoming election is supposed to be non-partisan.  The mayor, commissioners, school board, and BPU board candidates do not advertise a party affiliation.  That is unless they are funded by the Mainstream Coalition. An MC PAC endorsement places a candidate firmly in the partisan category and completely in the very, very left-wing (read high-tax, high-regulation) variety.

If taxpayers have any money left after the retroactive state income tax increase, property value increase—which immediately zeros out any offset by the much-touted but insignificant mill levy reduction, they can kiss it goodbye if the two Mainstream candidates are elected. There is clearly nothing this PAC won’t do to keep Kansans from holding on to any income at all. 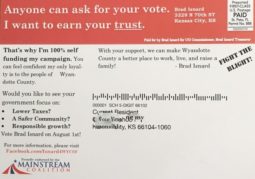 It should come as no surprise that at least one of the MC endorsed candidates mailed postcards in his district touting his “trustworthiness.”  He also switched parties recently–to Republican.  Must be feeling the voter restlessness in the Dotte about high taxes. Brad Isnard, District 8 Commission candidate, states on a campaign mailer that he is self-funded. Uh oh. Or, more accurately, uh-huh.  Politics as usual in the Dotte.

The other MC funded candidate is Sarah Kremer.  It’s entirely possible that she has no idea what the Mainstream Coalition means. Kremer claims she will fight for lower taxes. That promise just doesn’t fly with endorsements from a group that promotes the redistribution of income as one of its core objectives.

Caveat Emptor Wyandotte County voters.  Voting for these candidates will get you more of the same. High taxes, empty promises, and typical burdensome red-tape that is inherent with left-wing governance.