A handful of critical issues compete for consideration when choosing or rejecting candidates in Kansas: Massive, retroactive tax hikes (passed by Democrats), cryptic school funding tactics with flat or decreasing student outcomes (supported by Democrats) and the implosion of the healthcare industry in the state (ACA). Other issues are specific to the local economy.

High property taxes should lead the charge in Wyandotte County, but the issue gets little traction. It’s almost as if tax-abatement giveaways, backroom deals, low wages, high taxes, and the resultant high crime are just foregone conclusions in the Dotte. By all accounts, voters are okay with it. Those who don’t vote waive the right to choose for themselves, much to the delight and enrichment of state representatives for one of the poorest counties in the state.

Apparently, too few citizens in this small county are willing to connect the dots, as it were. Deeper analysis may reveal that voters in Wyandotte rather enjoy being on the short end of the economic stick. It provides loads and loads of fodder for social media outrage –which accomplishes exactly nothing, and it keeps the backroom UG favored candidates in office. Changing the economic direction in Wyandotte County appears to be impossible.

In fact, Dottes seem to prefer poverty. Embarrassing outcomes in public schools? Not a big deal here. Clearly, most enjoy their status as the abused and neglected step-child in the state, surrounded and taunted by our prosperous siblings to the north, south, and west.

Shrewd Washington DC Democrats have taken note of the apathy in the Dotte and worked hard to package a pitch-perfect candidate. Sharice Davids, allegedly raised somewhere in Kansas and occasionally returned to the state by groups like Emily’s List to harness this treasure trove of Stockholm faithfuls, surely sees Wyandotte County as some kind of political gift. Davids offers a solid promise to keep the Dottes enslaved in the comfort of Uncle Sam’s generous safety net, a.k.a: government-induced poverty (emotional and economic). The big payback is a staggering tax rate. Irony is mostly a lost art in the Dotte.

At a recent candidate event in the county, Davids rushed in late 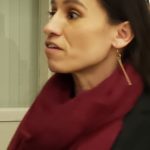 –presumably after assurances that Kevin Yoder was nowhere in the area, crouched behind the microphone like a cage fighter and whispered bumper sticker platitudes to a rapt audience. She brought her trusty dog whistle all the way from DC to communicate to Wyandotte County voters that she is like them: different. Her differentness will save them, she said to a cheering crowd.

Star-struck by the celebrity of a real DC operative, House incumbent candidate Kathy Wolf Moore barely concealed her adoration during Davids’ presentation. Wolfe-Moore clapped, nodded violently and shook her fist in support of this perfect storm of a candidate; Native American, female, elitist class and … well, pretty much just that. Even for voters ripe for exploitation as Dottes have always been, Davids’ identity politics are thin. Practically see-through. But, it’s enough for Dotte voters.

Davids also has the gay thing, but that’s hardly a unique identifier these days. Nobody cares, in other words. That particular bait typically only works with gay voters – and there are not enough of them to change an election – even combined with liberal white women who would sacrifice their first-born child to show allegiance to the gay community. Mostly though, nobody cares.

She is an actual Native American and Democrats have searched desperately for one on their team in recent months, so there’s that. Alongside the other 1/1024th Native American ancestry evident in the audience, she may have held the card for that one. The rest were middle class, single moms and dads, married parents, grandparents, gays, straights, African-Americans and Caucasians. Regular folks.

The big unifier is the Dotte connection. The Dotte captives, kept and flattered and stoked every election cycle by the usual suspects like Wolfe-Moore. Moore waves her Original Dotte pedigree around like some kind of trophy but paradoxically believes that a complete unknown such as (DC resident) Davids will save the poor, downtrodden voters from their own silly conundrum. After all, Davids is a female and … well, that’s the only real similarity here. She’s a DC attorney. How she plans to save the county is unclear. She promises billions of dollars in government handouts. She’s a Democrat. That’s all she’s got.

Davids rushed out after her brief announcement that she’s female just like a bunch of other females in Wyandotte County. Several in the crowd grabbed and pawed at her as she jogged past. Her plane left Kansas City shortly thereafter, headed back to DC. She’s a hero in the Dotte, but, again, the standards are low. 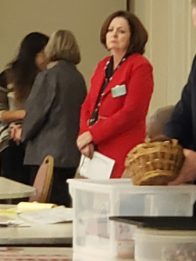 Nicest person in the County

nicest person in the county speech. She took it one step further when she introduced herself as the only Democrat in Topeka nice enough for Republican legislators to work with from across the aisle. When the crowd went silent, she challenged them to ask Republican legislators about working with her. Insisted, in fact. She glared at the small group of Republicans in the crowd and said, “Go ahead. Ask.”

Turns out her disclosure wasn’t fake news. Indeed, a well-known Republican, in a top leadership role no less, recently developed a close personal relationship with the nicest person in the Dotte. He cannot, therefore, publicly endorse the Republican candidate in Wyandotte County who has challenged his new bestie in the 36th District. See how it works here? It’s almost as if party platform doesn’t mean much. It certainly clears up the question of exactly what is wrong with the Republican Party in Kansas. 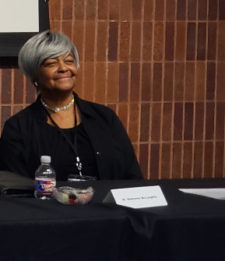 Chiquita Coggs, the lone Republican candidate at the event, was allowed one question from the event sponsors. Thankfully, it was one of the three questions remotely relevant to state legislation. Coggs shared a compelling story about the power of education, revealed that education was the one device that delivered her from the lure of dependence and complacency so common in the county. With her Masters and Bachelor’s degree, she escaped a familiar Dotte trajectory of African-American, single mothers. Coggs rejected the burden foisted on an entire demographic by the likes of Moore and Davids.

Senator Lynn Rogers, Rob Hodgkinson, Representative Pam Curtis, and Nathaniel McLaughlin spent the remainder of the event discussing the #MeToo movement, threats to Medicaid, Medicare, Social Security, and protecting pre-existing conditions (which, for the record, no candidate has actually threatened) In other words, nothing new. It is, after all, the Dotte.