Sporting KC … $200 Million is Not Enough

Sporting KC opened in Western Wyandotte County, Kansas in June of 2011. In 2015, it was too small to hold the more than 38,000 fans who bought tickets to see Mexico edge out Paraguay in a rare international match right here in the middle of America.

Arrowhead stadium hosted the game instead because apparently, two hundred million dollars just doesn’t build an adequate world-class soccer stadium these days. Who’d a’ thunk it? Just as well, it turns out. A handful of spectators consumed copious amounts of Cerveza and made a big mess out at Kauffman.

News organizations in KC, ever the purveyors of truth and accuracy, reported scenes of near-rioting: Seats uprooted from the concrete floors and tossed onto the field, concrete chunks lobbed at security guards, plastic cups and glass bottles launched across the holy ground of AstroTurf. Oh my.

Obligatory photos of an injured security guard made the rounds on social media and TV. The thirty-year-old injured guard stated on one news station that this particular act of violence was the worst he’d ever seen – at least in the fourteen years he’s worked security. It was even worse than being shot and stabbed he told a reporter. Hard not to have a little fun with that particular statement but all due respect for the scrape on his eyebrow.

Nothing illustrates the depth of bigotry in liberalism quite like a news feed on Facebook about a bunch of drunk Mexicans. Moderates sprinkled random bits of impotent philosophy throughout the feed and the high-grounders, ever-present in a crisis, remind readers that Jesus loves us all, chair lobbing Mexicans and bigots alike. It was, truly, one of those old-fashioned stories where the comments are still fun to read.

No word from the Paraguayans. They took a beating on the field, losing to Mexico 1-0. A veritable skunking. Either way, they had the decency and humility to leave quietly and not rip out any seats.

A brief search of factoids about the growth of soccer fandom in the area turned up a rare but possible truth in the Kansas City Falling Star: A big win by the KC Wizards some five years ago signaled the advent of soccer mania in the Heartland. Sounds like we need another $200 mil to add seats at Sporting KC. Tax abatement? Of course! It’s WyCo. 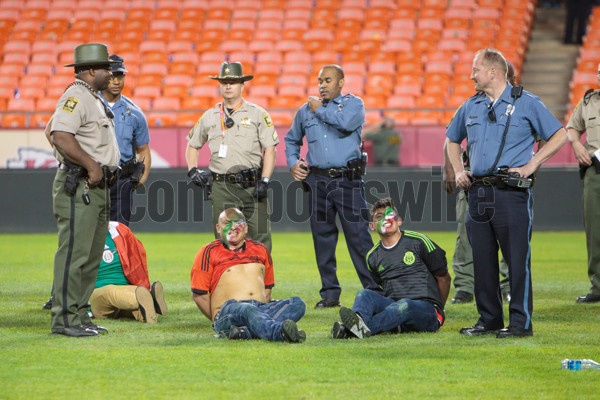