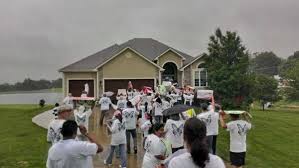 Well. Here we are with another election looming in Wyandotte County. I have to try pretty hard not to be cynical and just laugh when I think about elections in WyCo. The tired but true definition of insanity comes to mind. Voters continue to elect the same kinds of people and when nothing changes, they bitch and moan. I mean, let’s be perfectly honest here. If elected officials in WyCo had any intention of lowering or controlling property taxes, it’d already be done.

Regardless of their pre-election intentions, holding office in WyCo is a bit like being sucked into a tax and spend whirlwind unlike any they’ve ever imagined. We’ve all seen the promises, starting with the now defunct Woodlands, the bankrupted Legends Shopping and Tax Abatement Extravaganza, and now new rumors about a “healthy campus” proposed by Mayor Mark Holland.

Location for the 30 million dollar ‘healthy campus’ plan is slated for the 5th through 10th Street corridor in downtown KCK. Is it just me? I mean, yeah, this could potentially be a great success and propel Holland into the annals of legendary KCK Mayors.  In my most humble opinion, that very motivation is the one that leaves WyCo with rotting buildings and broken promises. It’s all about the legend. Everybody wants to be a rock star. Besides all that, there aren’t any annals of legendary mayors in KCK, at least not any which promoted WyCo into an affordable place to raise a family and retire. How’d those concrete pylons on State Avenue work out, legend-wise?   Mostly WyCo mayors are known for empty and rotting buildings that once held a promise of broadening the tax base and thus lowering those punishing property taxes for WyCo residents.

Candidates on Tuesday’s ballot look mostly the same as any other election in WyCo. Big promises. Similar backgrounds. At least for those who’ve held or run for office in the county. I can’t be the only one chuckling that the Tamika Pledger garnered no fewer than 122 votes in the primary election. I mean, seriously WyCo? And what about Terance Maddox? He won the primary for 4th district commissioner. So, yeah. I’m trying hard not to laugh.

In the 1st district commissioner primary, Melissa Bynum won and will face Mark Gilstrap in the general election.  Bynum has held office in local associations and groups around the county. She currently works for the mayor’s wife. WHAT??? Yeah. Still laughing. Bynum works for the mayor’s wife. The Falling Star, Kansas City’s withering excuse for a newspaper, accidentally stumbled on a true statement in an opinion piece recently, “Melissa Brune Bynum and Harold Johnson are highly qualified candidates who would work well with Mayor Mark Holland…”   Ya think? His wife is her boss! Of course she’ll work well with the boss’s husband. Sheesh. Good jobs are hard to come by in WyCo.

Gilstrap, a recently retired accountant for the UG is the logical choice for district 1 commissioner. Anybody know an accountant who likes to spend money? No. He’s a bean counter.

This would be a remarkable departure from business as usual in Wyandotte County. Somebody who doesn’t like spending other people’s money. Gilstrap lost a recent bid for a Kansas Senate seat. Not conservative enough. Before that, he was tossed out of a (D) seat for being too conservative.

Hmmm.. Imagine a candidate who clearly stands by his values in spite of the money-sucking vacuum whirling around him. Gilstrap would be my choice in WyCo. But, it’s WyCo. It may be easier to just bitch and moan.